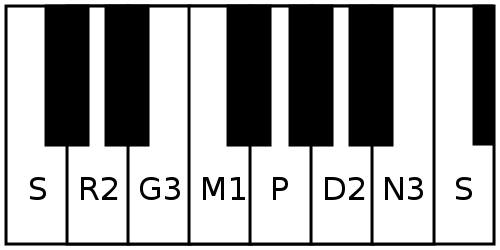 I’ve heard of the term “Graha Bhedam” before, and maybe listened to a song or two in music concerts.  But I’ve never heard such a wide range in a single song!  This song piqued my interest on this subject, and I did quite a bit of research on it.  Graha means ‘home’ and Bhedam means ‘change’.  And Graha Bhedam is essentially to shift the ‘home base’ for the notes without changing any of them in terms of absolute frequency.  Let me explain …

In Indian classical music, the Sa (Shadaj or Shadjam) is considered as ‘home base’.  This is the key note that the Shruti box or the Tanpura plays.  This is how instruments (including percussion instruments) are tuned.  When we shift home base, the Sa is shifted to another note within the raaga, and the rest of the notes take up relative positions without actually shifting.  So let’s say the current position of Ri is taken as Sa … then Ga becomes Ri, Ma becomes Ga, …. and so on such that Sa becomes Ni.  Let’s look at this using this amazing song …

This song is from the movie Tansen which was made in 1980 … but the movie never got released!  The singer is Yesudas and both Music and Lyrics are by Ravindra Jain. Apparently Ravindra had requested other popular singers of that time who found it too challenging.  Even Yesudas is believed to have struggled to do full justice to this song.

The song is composed primarily in C Major scale, which consists of all the white keys on your keyboard.  Unlike western notation which depends on absolute frequency, the Indian notation is based on a relative frequency – where the base note is set to Sa or Shadaj (Shadjam in Carnatic).  When we shift the Sa and derive the other notes relatively, we get Graha Bhedam – known as Murchhana in Hindustani music.

Which translates to: “Shadaj has got such a blessing!  You can fix any note as Sa and sing so cleverly, skilfully”.  Initially, I had not paid much attention to the lyrics, but once I realised what is happening I am so awestruck by its sheer brilliance.

As the song progresses, the lyrics clearly describe which note is taken as Sa and also names the resulting raag in Hindustani.  Each stanza also highlights the komal and teevra swaras involved and any key aspects..  In the table below, I have given the Carnatic equivalent as well.  And many are Melakarta Raagams too (raagas which have all the 7 notes in proper ascending and descending order), whose number is seen in brackets.  Though there are 7 notes in Indian classical music, including the komal, shuddha, teevra variations there are 12 notes.  You can see all 12 in the table below, with the black and white keys of the keyboard shown with appropriate colours.  For the 7 graha bhedam variations here, start with the purple shaded Sa and cycle back to the blue shaded area on the next octave.  If I had shown them all to the right, this table would have been too broad 🙂

The main raagas from Sa to Ni are named in the song itself.  For others, I had to got the best match for Carnatic and used the to map the Hindustani raagas :-). While browsing through other blogs I found slight different in the raagas mentioned.  Hence, request experts to re-check these note by note and verify. If you notice any better fit for any raag, please do sign-in and post your comments below.