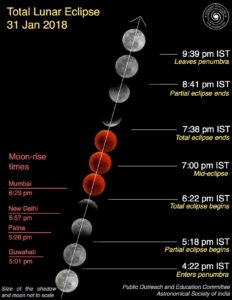 When I first heard the term it was a mixed up deja-vu of a lot terms I had heard before.  Like most of us, I have heard each of these adjectives applied to the moon, but never have them come together.  Close to this event on 31 January, 2018 my social media feeds were scattered with news and pictures.  Here is one which shows the various phases (pic on left), but I realise now that it did not give me the right picture on the sequence of events. 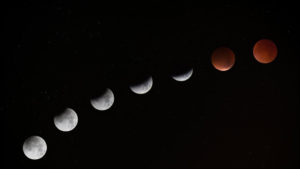 he one with timeline (pic on right) was the most helpful to plan.  But as an afterthought, it didn’t help me prepare for the key moment.  Read on, and you’ll know. I was recovering from a viral infection with antibiotics and somehow managed to dress up with multiple layers of warm clothes and land up on the front side of the apartment where we can usually see the moon rise.  I stood up on a wall and was waiting patiently.  The moon was already up, but I could barely see it in its dull dark shade, and didn’t realise that it was in total eclipse.  I tried with various settings on my DSLR camera, but could barely focus on the moon, forget about getting a good click.  The moon got brighter as it rose up, but it still took several experiments with settings and clicks to get a decent pic.  Even then, based on the pictures that were in circulation, the darkness of blood moon is something I had not planned for.

Similarly, the total brightness when the moon comes out of earth’s shadow to receive direct sun sunlight was another surprise.  First of all, I was unprepared … I was busy looking at my pictures and those from my neighbours, until someone mentioned that the bright ring is appearing.  But it was all so quick and the contrast of dark and bright was something the camera just couldn’t handle 🙂  However, I managed to capture the circular shadow of earth and edited the picture to give the size comparison.

Today, I did further research on these three keywords and have given below my understanding.  Interestingly, the next Blue Moon is coming up next week! 🙂  And we have a Blood Moon in July and a Super Moon in December this year.  But I’m not sure when these 3 will coincide again.

My first interesting celestial experience was the total solar eclipse on 24 October, 1995 in Kalpi, Uttar Pradesh.  But those days it was pure enjoyment from a terrace, without a camera or phone 🙂  More about that in another post maybe …